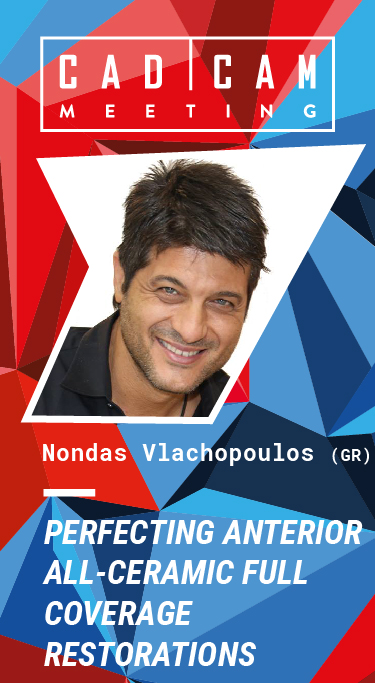 Nondas Vlachopoulos is an internationally renowned master dental technician. He continues to inspire people in the industry through his teachings and courses.

Certain people around the world get to be known only by one name; Sting, Prince … and Nondas is one of them!
Over the past few years, Nondas has travelled the world extensively, spreading his knowledge and leaving a trail of happy, driven and inspired dental technicians behind him. His love for the art and science of dental technology is witnessed and admired at his courses and recently undertaking the most challenging of tasks, the “Live Patient Case”, which leaves participants wondering what just happened, and words to the effect of “how the hell can he do that in just one bake and nail it?!”
People leave his courses with a complete overdose of knowledge, inspired to continue striving for excellence.

Nondas Vlachopoulos was born in Toronto, Canada. After moving to Greece, he graduated from the school of dental technology in 1985. He then acquired a BSc Hons from the School of Dental Technology of the Technological Educational Institution of Athens (1989). In 1990, he established his own dental laboratory “AestheticLab” in Athens. Since 2001, Nondas has been Opinion Leader for Ivoclar Vivadent, Noritake Dental and MPF Brush Co. in Greece. Since May 2014 he is an editorial reviewer at the AACD’s Journal of Cosmetic Dentistry (jCD). Nondas specializes in aesthetic all-ceramic and implant restorations and collaborates with the Dental School of the National and Kapodistrian University of Athens and its postgraduate programs of Dental Prosthodontics and Dental Surgery. Nondas has organized many seminars in Greece, USA, South America and many counties within the European Union.
He has participated with presentations in congresses, and he has also published articles in Greek and foreign Dental Technology journals. 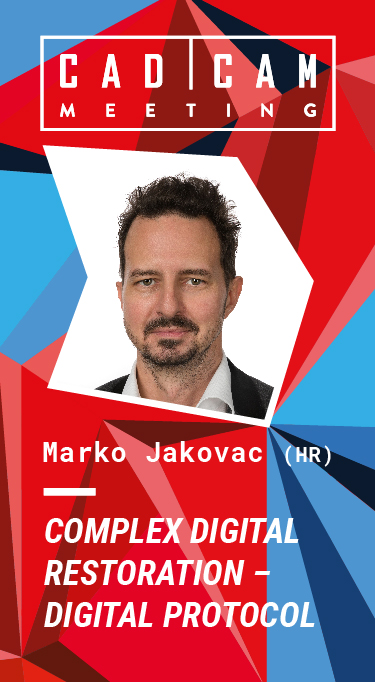 Marko Jakovac is the author and co-author of several scientific papers and he has actively participated in numerous international conferences. He is a lecturer and training course instructor (KOL) at international meetings for Ivoclar Vivadent, Carl Zeiss and SironaDensply CAD-CAM. He is a vice president of Croatian Society of Minimal Intervention Dentistry and a member of the Croatian Prosthodontics Society, European Prosthodontics Society, Croatian Society of Dental Implantology, Croatian Medical Association and the Croatian Dental Chamber. Moreover, he is the owner of the “Aesthetica” dental clinic and “Ae-vision” educational centre in Zagreb. 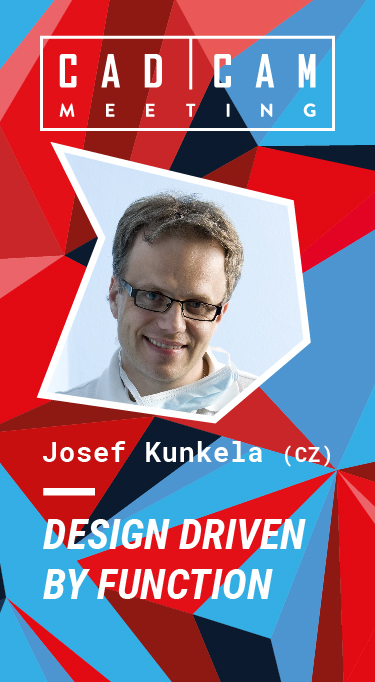 He graduated from a secondary medical school in 1991 as a dental technician. After 2 years of practice in the state dental laboratory he was a co-founder of a private dental laboratory, where he worked for more than 10 years. During this period, he pursued most of his free time to perfecting himself in his profession, especially in the field of ceramic restorations. He attended several foreign high-level training courses provided by top professionals. In 2002 he started a two-year residency in the USA. He worked in a private dental laboratory, cooperated with Ivoclar Vivadent and Captek, for which he held training courses at renowned dental exhibitions in the USA. After returning from the USA he worked as a dental technician for several years – consultant for Ivoclar Vivadent. At this position he lectured at many dental events in several cities around the world.
He has published in several journals at home and abroad. In his free time, he pursues to dental and artistic photography, drawing, oil painting and cooperates in publishing of a professional magazine. 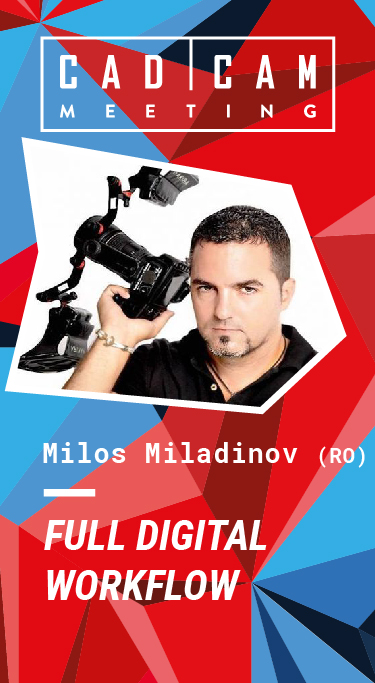 Magical all on 4 in continous progress

Dr. Stanko Miletic was born in Chicago Illinois USA in 1980.

Magical all on 4 in continous progress

Dr Sci. Zoran Vlahović is a specialist in oral surgery. He was born on 19th August 1971 in Priština. He finished general dental studies at the Medical Faculty in Priština, department of dentistry, in 1997. Since 2010, he has been an oral surgery specialist.

He has gained his knowledge and skills in the field of implantology at the one-year practice at the Military National Academy in Belgrade and on courses in the region and abroad. Since 2013 he has been the one and only doctor of dental sciences in Montenegro in the field of dental implantology. He is an opinion leader and lecturer for Bredent implant system and the Company Planmeca in the field of three-dimensional radiology.

Finished the Secondary Sanitary School in Karlovy Vary as a dental technician in 1997. Graduated from the Charles University in Prague in 2005. During the study of medicine worked as a dental technician. Since 2005 worked at the ASKLEPION – Clinic and Institute of Aesthetic Medicine in Prague (Czech Republic) as a specialist in aesthetic dentistry, CAD/CAM, and all-ceramic restorations. Since 2009, director of dental clinic DentInn s.r.o. in Prague. Since 2012, private practice EXI-GROUP s.r.o. in Prague. He was a Vice-President of Czech Society Of CAD/CAM Dentistry, member of the CZADE– Czech Academy of Dental Aesthetics. Works as a certified CEREC trainer for dentists and dental laboratories in the Czech Republic and abroad. User and trainer for T-Scan technology. Author of a study: Long-term Functionality And Failure Of The Ceramic Veneers. 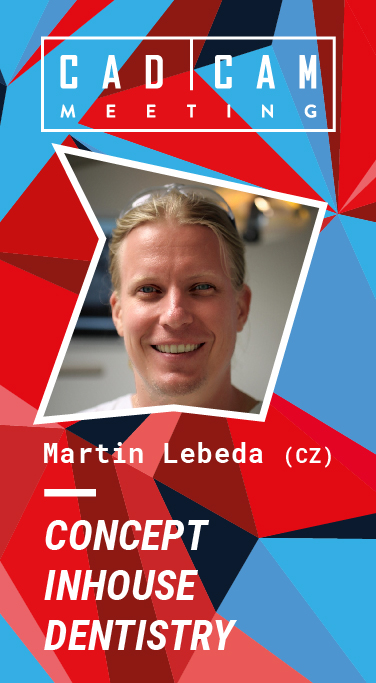 Martin Lebeda is graduated dental technician as well as dentist. He founded Dentalcentre.cz based in GH PUPP in Karlovy Vary. During entire professional life, he is interested in complex dental reconstructions using fixed prosthetics and implantology. In his dental office and laboratory, he uses CAD/CAM technologies, extraoral and intraoral scanner, 3D printing and navigated implantology in connection with dental CT. He is a key expert in the laboratory and in-office system of Dentsply Sirona. He specializes in all-ceramic restorations, implantology and digitally produced removable prosthetics. 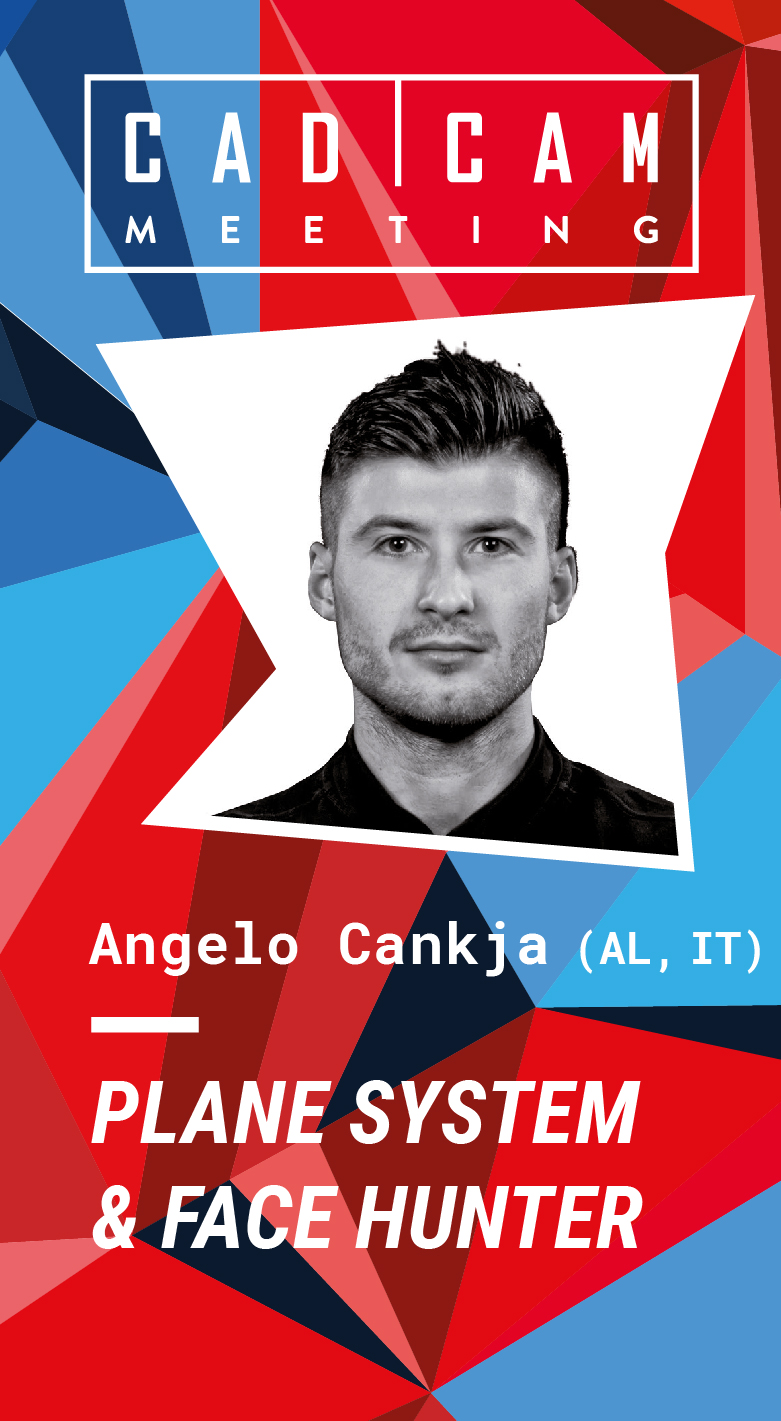 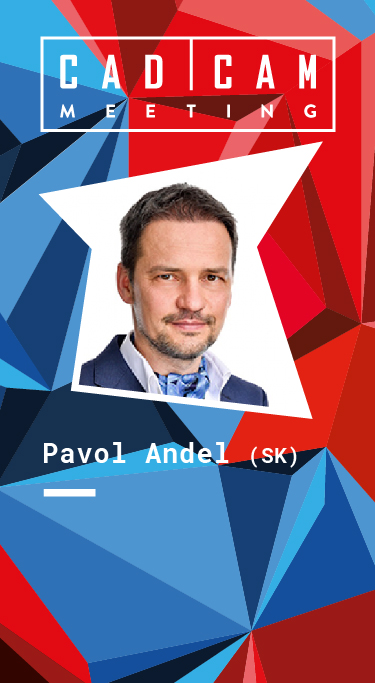 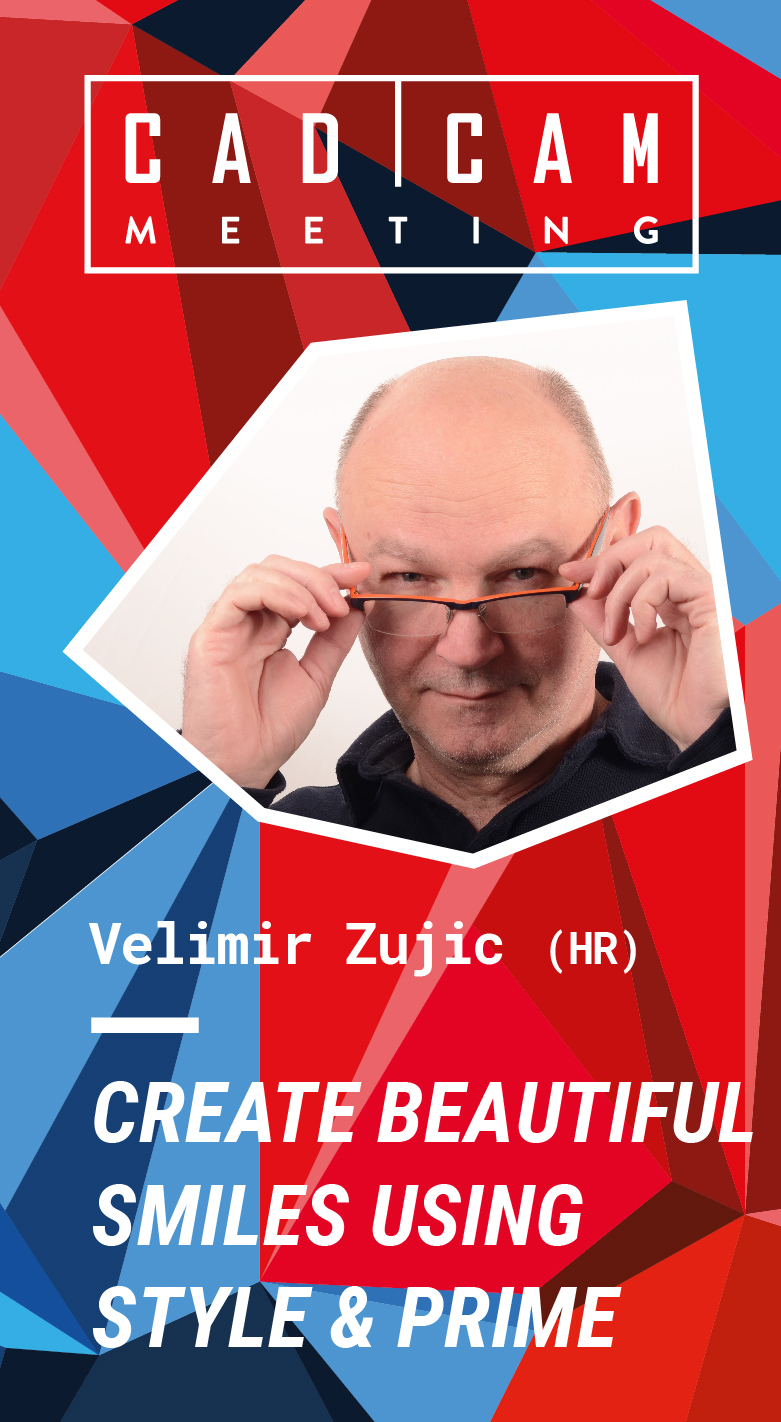 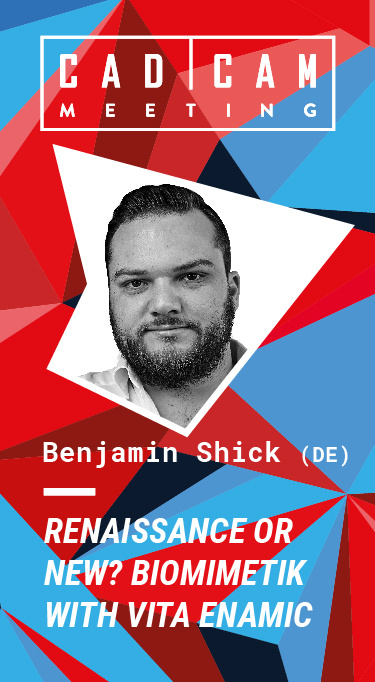 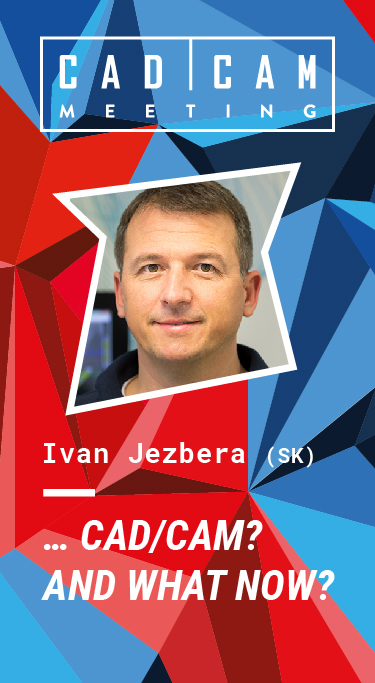 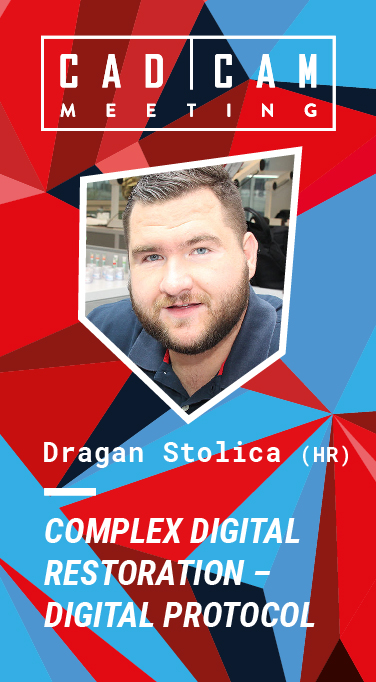 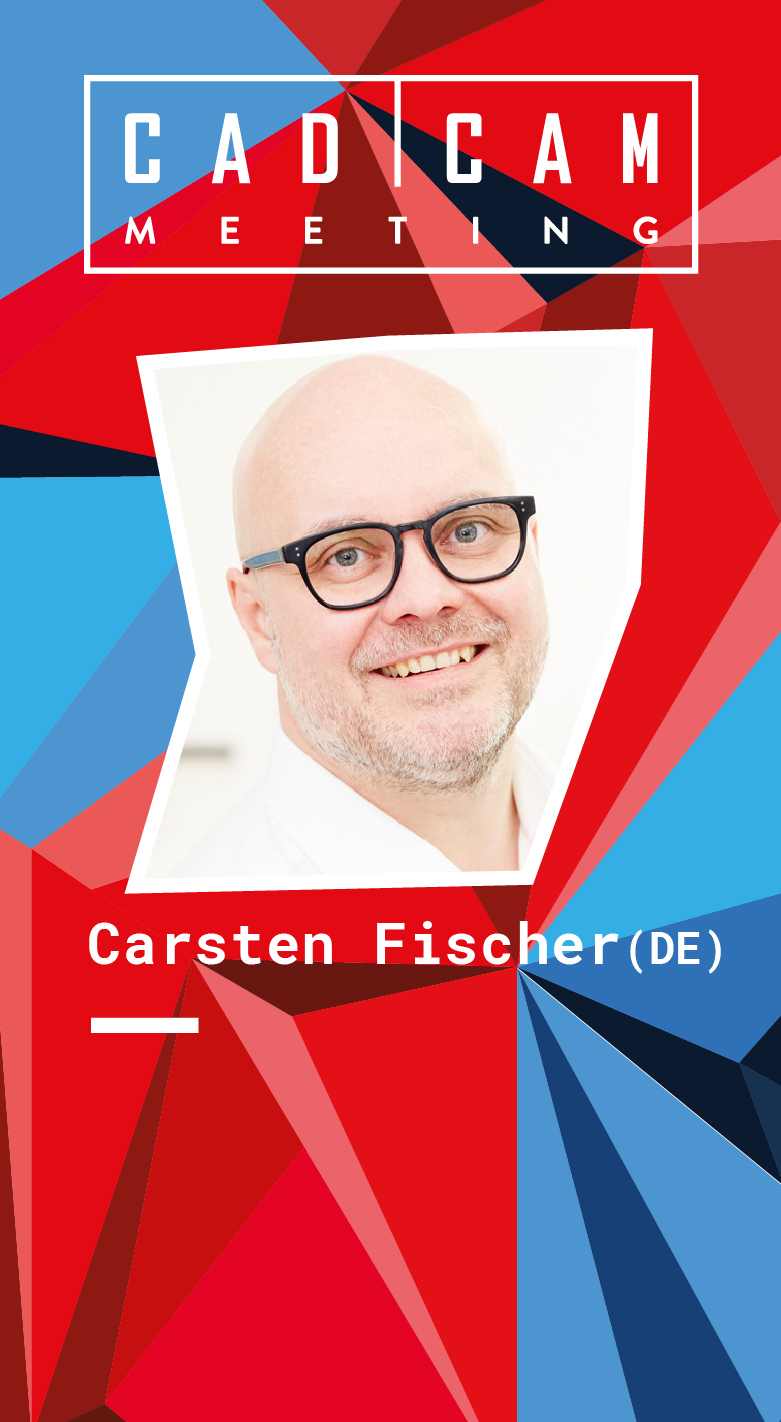 Carsten Fischer has been an independent dental technician running his own company in Frankfurt, Germany since 1996. He has been an internationally renowned speaker since 1994, supporting his activities through publications in many countries (Brazil, Argentina, Japan, Australia and Europe).

Carsten Fischer is a member of several professional advisory boards and a long-time consultant for major players within the dental industry. His focus is on CAD/CAM, ceramic double crowns, custom abutments, and allceramic materials. Between 2012 and 2014 he has been a part-time employee of Johann Wolfgang Goethe University in Frankfurt.

In 2013, his presentation was voted best-in-class by the Association of Dental Technologies (ADT). In particular, the award-winning publications with Dr. Gehrke found currently in the international dental press a high attention and are regarded as a yardstick for contemporary review of individual abutments. Carsten Fischer is a lecturer at Steinbeis University, Berlin, speaker for various organizations (DGI) and vice president of the EADT.

One zirkonia to rule them all?